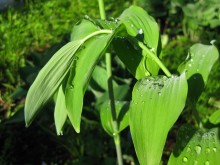 Polygonatum comes from the Greek word meaning “with many knees”. This is most likely in reference to the bulbous, jointed rhizomes. Canaliculatum comes from the Latin for “channeled” or “with a long groove”. Some botanists and taxonomists divide this particular plant into three different species – P. canaliculatum, P. biflora and P. communtatum. The differences are difficult to tell without magnification..

The common name, Solomon’s seal derives from its rootstock that bears flat round scars which resemble the impression of a seal. Biblical King Solomon’s famous seal was a magical signet ring. A transverse cut on the root was once believed to reveal Hebrew characters left by King Solomon’s seal.

Since each year of growth leaves a new “seal” on the rhizome, you can estimate the age of a Solomon’s seal plant by counting the scars.

Even though the stems can easily reach 6 feet in length, the plant itself is generally 3 feet or less in height with the stems making long, sweeping arches. It’s found on rich woodland soils and occasionally in the open areas of cleared woodlands. It prefers cool moist soil but tolerates dry or damp once established. Green-white to white flowers bloom beneath the leaves from May through June. It is a rugged, deer resistant plant largely unbothered by disease.

The roots, berries and young shoots were once used a sources for food. The Iroquois actually cultivated Solomon’s Seal to use the roots for a dietary staple. The Chippewa believed ingesting the roots would aid in curing back pain and/or kidney problems. In order to achieve its full effect, they believed the medicinal rootstock needed to be saved in a pouch made of bear’s paws. The Meskwaki and Potawatami would place a small piece of root on burning coals to create fumes that could revive one from an unconcsious state. Early settlers used preparations of the root to treat hemorrhoids, arthritis, poison ivy, skin rashes and eczema. They also beleived that an extract from the root of P. canaliculatum would make freckles disappear or diminish.